Neopharm Group, said Adam, specializes in the manufacturing and distribution of medicine and different auxiliary products, and has subsidiary  companies among which is a provider of nursing care services at home, pharmaceutical and product shipping and more.

“The company had different ERP systems, which we consolidated into a single Priority ERP system. We went live within nine months a year and a half ago, and the budget was much lower than planned,” said Erez Adam, former Neopharm’s Chief Information Officer.

Adam spoke at the ERP Conference – “The New Age of Industrial Computerization.” The conference, held today at the Tel Aviv Sheraton Hotel, produced by People & Computers, was attended by hundreds of professionals in the field. The conference hosts were People & Computers Founder and leader Peli the Tiger (Peli Peled) and Yehuda Konfortes, Chief Editor of the group.

Adam is currently serving as CEO of Promedico, a subsidiary of Neopharm that acts as the supply chain company of the group. He described to the conference’s audience how he integrated several ERP systems into a single Priority ERP system.

The Neopharm Group, Adam explained, manufactures and distributes pharmaceuticals and various health care products and has several subsidiaries including companies that provide nursing care services, prescription drug delivery services and more. “The ERP project wasn’t an easy matter,” he said. “During the process many decisions were made that were not at all trivial. I started out as a CIO and ended as a CEO.”

“Neopharm,” said Adam, “was founded in 1941, as is owned by the Forer family, and has a yearly turnover of 1.5 billion NIS and 600 employees. The Group’s companies handle branding, marketing and sales of consumer health products. Promedico employs 150 workers, has 100 partners and over 1,000 orders per day and 22,000 deliveries per month.”

The journey toward one ERP system, said Adam, “began in 2008. We had many ERP systems in the Group: Promedico used Movex, Eldan used Priority, a different company used a different version of Priority, and the other companies used local ERP systems.”

Adam stated that “the planned cost was five times more than what it actually cost. You have to take into account several important criteria when choosing an ERP system before its implementation: optimized cost-benefit ratio; meeting the company’s needs; maintenance; compatibility and future upgrade capability; number of installations; regulatory provisions and choosing an experienced implementer—in our case, MedaTech.”

“Today,” Adam said, “we’re at the point where all system operations are self-managed and sustained. We manage our own support via four employees who have been trained in Priority. This is after receiving ongoing assistance from MedaTech and Eshbel. There were nights during the implementation that I didn’t sleep. There were times I required the intervention of senior figures in Eshbel; I would call and explain that my neck was on the line, and Eshbel and MedaTech people would help me out.”

“To conclude,” said Adam, “today we stand at 250 Priority ERP users, 60 WMS users, 28 field agents working with the sales module, 15 mobile users for PDO supply reporting and 25 field technician module users. The system continues to expand and next month we’ll be starting a project in Europe.” 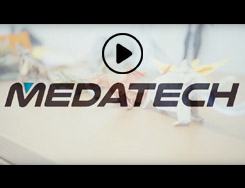 Your business is our top Priority
See video